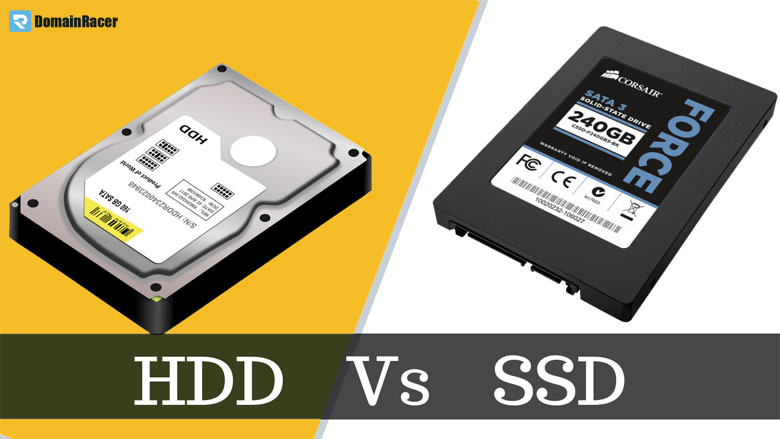 The world is moving fast with the passage of time. Macro things are becoming micro. Technology has moved from slower to faster. In the same way, the hosting storage system is changing with time.

We need web hosting services to get any website online. Every hosting company has different servers for hosting websites. All the data uploaded and shared on websites is stored on those servers.

In simple words, the servers contain large amounts of storage space to store different data. The data may be store on SSD or HDD drive.

Today we are going to see SSD vs HDD hosting. While you are going to select the best web hosting provider, then consider the providers that provide SSD hosting to their customers.

HDD stands for Hard Disk Drive. It is a traditional hard drive hosting and most of the hosting providers still provide HDD to their customers.

As compared to SSD drive hosting, the disk fragmentation, noise, disk failure rate, booting time of HDD drive is higher. Also, the durability of the HDD drive is very low.

SSD stands for Solid State Drive. The speed of SSD drive is 300% faster than HDD drive. It does not have any moving parts like HDD drive.

The difference between SSD and HDD hosting:

SSD Hosting can read and write data approximately 500 MB per second. It is really fast compared to HDD.

On the other hand, HDD is the older version. Everyone knows that it contains a disk in it which rotates at some speed to read and write data. This process is slower.

So, it is very clear that HDD is too much slower as compare to SSD. So, if you prefer hosting with high speed, you should go for best SSD hosting.

Data security is one of the important things in hosting servers. If your data is safe then there’ll be no problem. But if you are buying such hosting which do not offer 100% guaranteed data security then your data is in bad hands.

SSD is latest technology and it has improved the data security system. SSD do not contain spinning parts. In this way, there is very little chance of server failures. Server fails because of overload and overheating.

As there are no moving parts in SSD, there is very low heat. Thus, SSD reduces the server failure chances. In this way, server works smoothly.

Therefore, the rate of SSD hosting servers failure is very low which is approximately 0.6%.

However, HDD is old technology. It is larger in size. It also contains spinning parts. These spinning parts spin several thousands of times in one second.

These spinning parts move until the server is on. So, this rapidly spinning disk in HDD produces heat.

In results, it slows down the whole server. As the servers slowdown, load increases. This increase in load causes server system failure. Thus, data is lost because of HDD server failure.

Any mechanical thing needs a lot of power to work. However, SSD is not mechanical because it does not contain any moving parts. It is made up of chips and solid state.

Thus, it requires less power while comparing to HDD. SSD requires only 0.68 watts of power while performing any kind of task. So, it is very low as compared to HDD.

HDD has moving/spinning parts that act as mechanical parts. HDD contains a disk that moves to store and fetch data. It requires little high power to rotate that disk.

Therefore, HDD has one more drawback that it consumes more power than SSD. It consumes 7x power while performing any task.

If you want to save your power, you can go for SSD web hosting.

SSD is more durable and reliable because it is fast. It contains no spinning parts which leads to very less failure of SSD.

Your data is more safe in this drive. You can access your data within seconds. In simple words, SSD hosting will never disappoint you.

HDD – wait for a long to fetch data

On the other hand, HDD is slow as compared to SSD. It is not as durable and reliable. Your data could be lost because of HDD failure.

Sometimes, you have to wait for a long to fetch data because of slow HDD.

HDD has some drawbacks that’s why it is cheaper in cost. 1 gigabyte HDD price is four times lower than 1 gigabyte SSD price.

If you’ll buy HDD to save money, you may find HDD best for some time. But after too much usage, you’ll experience different drawbacks.

Which is best for your requirements?

The choice of storage drive is based on your demands. If you have a website that having high volume of traffic then you will need SSD hosting. 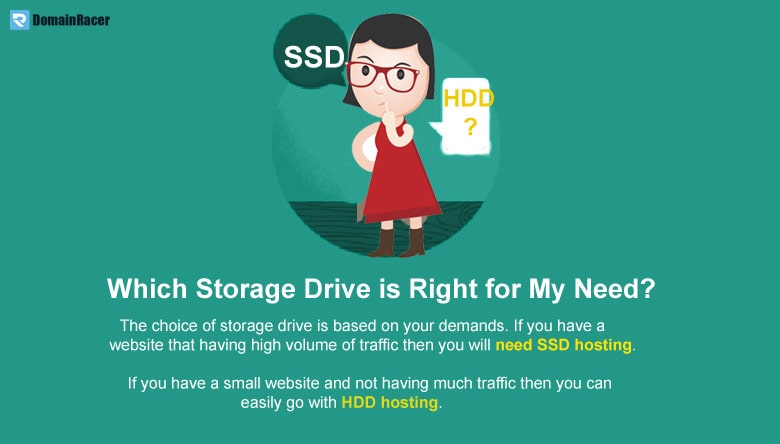 If you have a small website and not having much traffic then you can easily go with HDD hosting. Nowadays most of web hosting providers offer SSD drive as standards.

By discussing the difference between SSD hosting and HDD hosting, we have concluded that SSD is best and better than HDD. SSD is best because of its high speed, low power consumption, High data security, high durability and reliability.